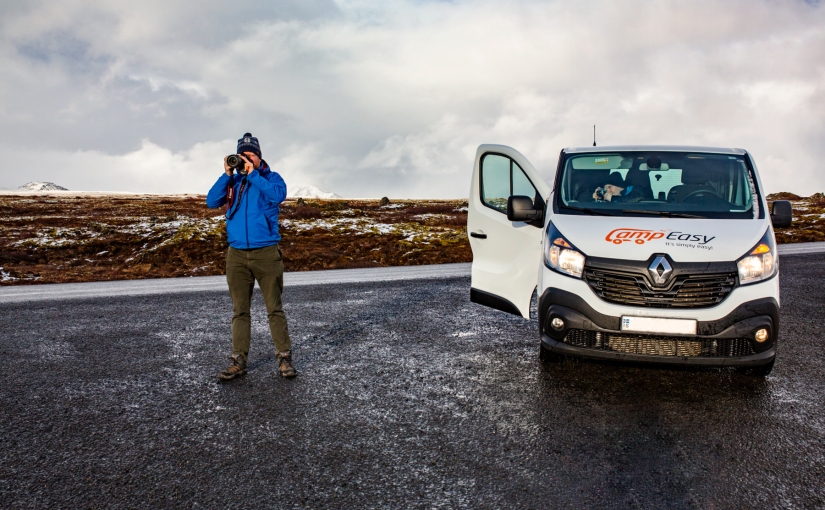 Iceland has become a haven for tourists and enthusiastic photographers like myself, looking to discover and capture the amazing.  With low-cost three-hour flights from London with easyjet and WOW airlines, a trip to Iceland has become a reality rather than a dream for the budget traveller.  However, in this case, ‘budget’ may be used in loose terms due to the high costs of accommodation, food, drink and transport on the island.

Between the 4th and 7th May 2018, myself and two of my closest camera-loving friends took a trip to discover the Golden Circle and South Coast of Iceland and this is how we did it:

Disclaimer:  I have included approximate costs as occurred on our trip to give an idea of what we spent.  However, be aware that although food and drink costs should not change much, travel costs could be significantly different depending on how you spend, discounts given and what time of year you travel.

The trick with finding a budget holiday is to keep an open mind and not tie yourself down to one place or a particular time of year.  Our dates in this case were set in stone as the bank holiday long weekend at the beginning of May.  To get the best prices for that weekend we used www.skyscanner.net which is a great tool in that it gives you the option to search ‘everywhere’.  We searched flights one way from London to Everywhere keeping the option open to return to a different city depending on costs and connection flights.  For example you can search Keflavik to ‘United Kingdom’ and it may turn out cheaper flying back to Manchester rather than London.
Skyscanner brought up various locations from London with similar journey prices like Oslo, Basel and Amsterdam but we settled with Keflavik, Iceland where I could get a return journey from the Channel Islands via London with a cabin bag for only £140 using easyjet.com.

The flight from London Luton to Keflavik was at 6.30am on Friday morning, so we decided to fly to Luton Thursday night (£14 one way) and stay over in the London Luton Ibis Hotel (£38 my part for twin room).  The hotel is around a 10 minute walk from the airport.  It was a little confusing as to which direction to walk from arrivals, but there were plenty airport staff around friendly enough to point us in the right direction.  We arrived at the hotel after 11pm, checked in, dropped the bags in the room and met down at the bar for a quick pint and a catch-up before bed.  The hotel staff were readily available and we were pleasantly surprised that they have a limited bar menu which is available 24 hours – http://www.ibis.com/gb/hotel-1040-ibis-london-luton-airport/index.shtml.

We were offered a wake-up call at 4am which arrived on time and we set off back to the airport excited about the pending journey.

If we wanted to have truly kept to a budget in Iceland, there were plenty of hostels offering very good prices (£15 per night) but we decided to push the budget towards sharing costs of a camper van so that we would have transport as well as a roof over our heads without having to rely on booking excursions, hire cars or buses.
We researched using www.tripadvisor.co.uk/, reading various scary stories of punters being charged over the odds on the return of the camper vans for squeaky doors caused by opening in high winds, scratches on the dining table, and breakdowns.  Although we seriously considered snail.is/, which had many good reviews, we went with the ‘Easy Fun’ three-man camper van from www.campeasy.com/ which also had many great reviews and videos of the actual vans on their website.
They offered a few additional extras like in van wifi, radio transmitter, night time heater, gas stove right down to guitars, songbooks and bandannas.
The campeasy website has helpful FAQs, maps of the main tourist sites, open all year campsite locations and live traffic and weather reports.  They were quick to answer the various questions we had and put us at ease (as much as they could) in relation to the insurances.  The main issue to note with car hire insurance in Iceland is that the excess cannot be avoided no matter what level insurance you take.  We were told after taking the complete insurance that we would be liability free from any damage from gravel but there would a maximum of around £800 charged on return if there was any damage caused that was 100% our fault.  It was explained in a way that if we were hit by another car from behind, we wouldn’t be liable at all, but if we hit someone from behind, the £800 would be taken, damage assessed and any left over money from the cost of damage returned.
We booked our free bus tickets from the airport to the Reykjavik BSI bus station through the campeasy website and from the bus station got into a taxi to the campeasy offices paid by them on arrival.  The taxi on the way back to the bus station was also paid by campeasy but we needed to pay for vouchers from the bus station to the airport.
Because we were leaving on an early flight on the Monday, campeasy allowed us to check the car in with them on the Sunday (by 5pm) allowing us to stay another night in the van (avoiding hotel costs) and we dropped the keys through the letterbox Monday morning after the taxi arrived.
The camper van was reliable, heater and gas stove worked well and there was enough space for 3 grown men to sleep in the back.  The van was 2 wheel drive, so we were not permitted to drive on ‘F Roads’  (Off road) but most of these type of roads were still closed for winter at the beginning of May.
Warning!  The weather is very changeable in Iceland.  We had wind, rain, snow, hail and sunshine changing about every half hour or so.  It’s worth researching some driving-on-ice videos for tips on speed and what to do if the vehicle starts to slide on the ice.

The total cost for the camper van with discount, additional drivers and extras – which could all be negotiated lower or higher dependent on what you desire – came to £900 which we split 3 ways.
Fuel for the weekend cost around £80 but unfortunately this was more due to forgetting about using the fuel discount card provided by campeasy which I believe saves around 36p per litre.
It is illegal to sleep in the camper van anywhere other than in a campsite and these varied in price between £14 per person (not van) in Reykjavik and £10 at the Skogafoss campsite.  Hot water and showers were available at both, but be aware in May, it can be a bit chilly before getting in and out.

Through research from tripadviser and various other travel blogs, the best advice we read was to buy alcohol from the duty free shop in Keflavik airport before heading to the bus.  The amount you spend here is relative to what you want out of the trip, but for the purposes of the blog we spent around £30 each on wine, beer and some large bags or chocolates and sweets for the journey.  We actually bought too much and ended up with quite a lot of leftovers at the end of the trip.
After picking up the camper van, we headed around the corner to the local ‘Bonus’ supermarket – https://bonus.is/.  Here we spent £20 each on snacks and food, which again was more than we needed as we were happy to revert back to our university days feasting on only pasta and cheese for the 3 nights with a sauce if we are lucky.
We did however venture out on our last night to Reykjavik and had a meal at Bazilika, where you could order a 12″ pizza or double cheeseburger and chips for around £18 and a local beer for just over £9.  The menu is available on their facebook page – https://www.facebook.com/bazilika.reykjavik/ 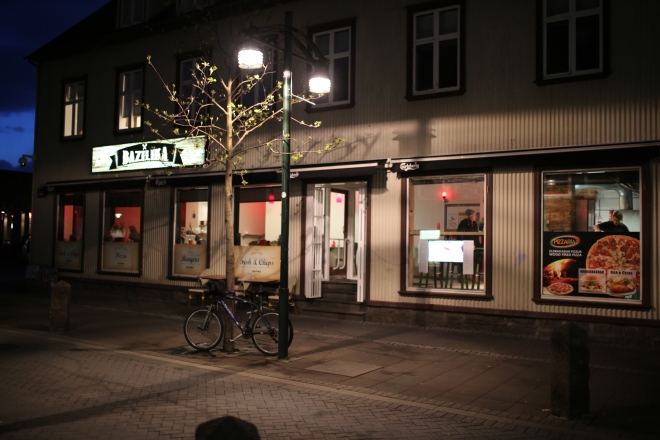 After eating we were treated to some jazz music in a local pub Hresso Hressingarskalinn where we purchased a pint from the bar for around £10 each – https://www.facebook.com/hressingarskalinn/ 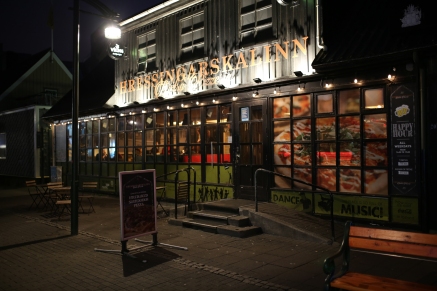 To summarise, the costs for the whole trip were:

However, there was £75 of extras in the camper van we didn’t need or use, we could have done food and drink with £20 and not gone to the pub.